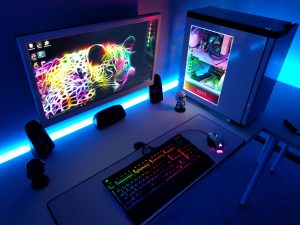 A visit to the local computer game store has been a disturbing experience of late. Never mind the predictable brutality and gore of the games. Here’s the really creepy part: Fewer and fewer of the latest titles will run on a PC.

The explosive success of Sony’s PlayStation 2 gaming platform, and the less spectacular but sizable demand for Microsoft’s Xbox and Nintendo’s GameCube, has recast the computer gaming market. PC users find themselves feeling a little bit like owners of Apple Macintosh computers. For years, many popular games were issued exclusively for the PC, with the few exceptions appearing in Mac versions long after PC owners had tired of them. Now it’s PC users who sit with twitching fingers, waiting for PC versions of hot titles like the renowned action game Halo, presently available only on the Xbox.

Most games are purchased for the living room console rather than the bedroom computer. According to NPD Techworld, a research firm, PC game sales last year hit 65.3 million units, up 3.6 percent from the previous year. But 110 million console games were sold during the same period, and sales for the category rose 9 percent. That means that consoles have already grabbed about two-thirds of the digital gaming market, and are snatching at the rest.

It’s enough to make this PC gaming loyalist fear that his favorite platform is doomed to irrelevance. Journalists react to such worries by grabbing the phone. We like to check with the experts – the people who build PC games and the machines that run them. Their response is a sovereign remedy for PC gamer panic.

“There’s still plenty of good revenue and good growth in PCs. If anybody wants to quit making PC games, Electronic Arts is more than happy to take the business from them.” So says Jeff Brown, spokesman for Electronic Arts, the world’s largest maker of computer games. Mind you, it’s easy for Brown to say, considering the company’s extraordinary success on the desktop. It publishes The Sims, which recently became the best-selling PC game of all time.

But Brown has plenty of company. Mad Doc Software, a design house in Beverly, has yet to produce a console game. But Mad Doc has just completed The Art of Conquest, an expansion pack for Sierra’s hit PC strategy game Empire Earth. Business manager Shaun McDermott says that consoles come and go – remember the death of the Sega Dreamcast? – but PCs are forever. “The installed base is so large that PC games are pretty much here to stay,” McDermott says.

For one thing, complex strategy games like Empire Earth are more easily played on a desktop machine with a keyboard, than on a console controller optimized for driving and shooting games. The same goes for role-playing games like Sony’s Everquest, which are played over the Internet. Sony has just begun selling a device for connecting a Playstation 2 to the Internet, but it’ll probably attract players of fast-twitch sporting and action games, not the desktop strategists.

The consoles suffer from another major drawback: They never change. A Playstation 2 is crammed with magnificent digital video and audio technology, real state of the art stuff – by the standards of 1999. Set against today’s hardware, it’s already looking a little faded. Meanwhile, new PC generations roll out three or four times a year, each with faster processors, drives and graphics chips.

It’s easier to write games for the Playstation than the PC, because every Playstation is exactly the same, and will be until the Playstation 3 comes out, probably in 2005. So programmers can concentrate on getting the last little bit of performance out of its custom-made 128-bit CPU chip.

It’s tough to find two PCs that are exactly alike. Game programmers spend half their time making sure that their code will run on all the millions of possible configurations. And they’ve got to make allowances for the users who’ll plug in a newer graphics chip or sound card, and those who’ll run the game on machines that haven’t even come out yet.

But the rapid innovation in PC hardware means that PC games look and run better on each new generation of machine. Today’s best desktop machines are already more powerful than any console, and they’re only getting stronger.

Indeed, some companies have found their fortune by catering to PC gamers who want nothing but the best. Alienware Corp. of Miami expects to make $45 million this year and $100 million next year from selling customized PCs to gaming fanatics.

Alienware’s own executives have been surprised at how little the console boom has mattered. “We recognized that consoles were just exploding, and at first we thought it was cutting into our business,” said Kevin Wasielewski, Alienware’s vice president of marketing. But for hard-core gamers, the consoles just weren’t enough. “They’ll play their Mario [game] on the console, but when they’re ready for some really advanced gaming they’ll go to the PC,” Wasielewski said.

In a time when a decent PC sells for $800, Alienware customers cheerfully cough up as much as $4,200 for a monstrous game box with top-of-the-line processing power and a case decked out in custom metallic paint – Space Black, Conspiracy Blue, Cyborg Green or Martian Red. Every Alienware computer is a fashion statement, and a welcome rebuke to PC pessimists. The game’s not over yet.