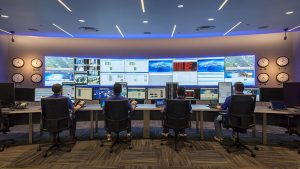 Network Operations Centers are centralized locations within a business or company that supports its’ IT infrastructure and other essential components. Ultimately, it ensures data center availability and plays a crucial role within the organization. For instance, it supports a computer network, detects and resolves infrastructure issues, resolves any IT issues and connect to a high-speed internet connection to provide the maximum amount of bandwidth possible.

The primary goal of a NOC build is to maintain network and data center availability 24/7. This goal is rarely achieved as there is always some sort of small hiccup that appears here and there within a system – as well as allocating money purely for the sake of a NOC center. Point in case, it’s nearly impossible for a NOC center to be 100% perfect. Problems tend to enter the picture when organizations attempt to address them with “affordability” in their mind.

NOCs relate to data centers in a variety of fashions. However, there is much debate as to how their clear functions correlate to one another. For instance, there are some that say that data centers are there to host and manage a business’s computing resources and databases. Additionally, they also handle a good chunk of security and network controls as well.

It sounds relatively similar to a NOC, right? Well, to be fair, a NOC acts like more of a management control center and manages infrastructure events, monitoring tools, customer integration tools, reporting, and more. They coexist and feed off one another in order to effectively operate. So, if a company like Constant Technologies, Inc. or any other integrator were to customize a NOC center and a data center, they would look fairly similar. The only major difference between them would be the operations team and staffing that handle the whole system.